The
changelist feature in TortoiseSVN is only available in Windows XP and
later, as it depends on a shell capability which is not present in
Windows 2000. Sorry, but Win2K is really quite old now, so please don't
complain.

You can see changelists in several places, but the
most important ones are the commit dialog and the
check-for-modifications dialog. Let's start in the
check-for-modifications dialog after you have worked on several features
and many files. When you first open the dialog, all the changed files
are listed together. Suppose you now want to organise things and group
those files according to feature.

Select one or more files and use Context Menu → Move to changelist
to add an item to a changelist. Initially there will be no changelists,
so the first time you do this you will create a new changelist. Give it
name which describes what you are using it for, and click OK. The dialog will now change to show groups of items.

Once
you have created a changelist you can drag and drop items into it,
either from another changelist, or from Windows Explorer. Dragging from
Explorer can be useful as it allows you to add items to a changelist
before the file is modified. You could do that from the
check-for-modifications dialog, but only by displaying all unmodified
files. 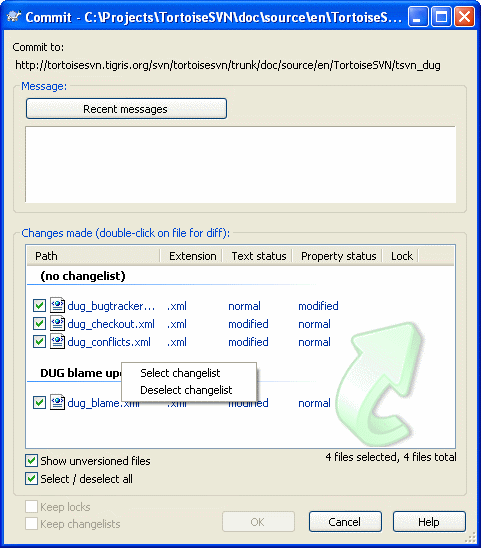 In the commit dialog you can see those same files, grouped by
changelist. Apart from giving an immediate visual indication of
groupings, you can also use the group headings to select which files to
commit.

On XP, there is a context menu when you right click on a
group heading which gives you the choice to check or uncheck all group
entries. On Vista however the context menu is not necessary. Click on
the group header to select all entries, then check one of the selected
entries to check all.

TortoiseSVN reserves one changelist name for its own use, namely ignore-on-commit.
This is used to mark versioned files which you almost never want to
commit even though they have local changes. This feature is described in “Excluding Items from the Commit List”一节.

When
you commit files belonging to a changelist then normally you would
expect that the changelist membership is no longer needed. So by
default, files are removed from changelists automatically on commit. If
you wish to retain the file in its changelist, use the Keep changelists checkbox at the bottom of the commit dialog.

Changelists
are purely a local client feature. Creating and removing changelists
will not affect the repository, nor anyone else's working copy. They are
simply a convenient way for you to organise your files.